Ethereum Classic (ETC) has performed quite impressively over the last month. The coin has managed to rise from its yearly lows and hit an all-new high for the year. At one point, it was testing $60, which was huge. But ETC appears to have fallen ever since. Here are some key developments: 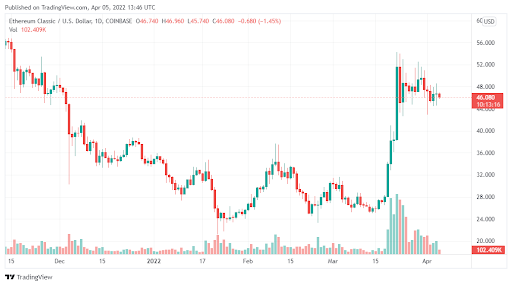 The recent uptrend in ETC has largely been fueled by Ethereum miners who are buying the coin in anticipation of Ethereum 2.0. In fact, tracking the progress between ETH and ETC, it is clear that demand has largely favored Ethereum Classic.

For example, ETH has been on a massive bull trend since mid-march and has gained about 30%. Over the same period, ETC has gained nearly 80%. In essence, ETC has outperformed ETH by two times. But this uptrend is reversing and doing so quickly.

For instance, despite its rally, ETC has failed to breach the 200-day SMA. Also, the distance between the 50-day SMA (which ETC is above now) and the 200-day SMA is very high. This typically indicates slowed bullish momentum. We expect ETC to retreat sharply, and once it breaks $38 support, the fall will be much bigger.

Is ETC worth buying?

For now, it seems the coin has lost its upside potential. You don’t want to buy an asset that is facing a trend reversal.

A good rule would be to give it a week or so. If the $38 is breached, then a period of selling will come, after which the price will consolidate. That would be the best time to buy.

Market crash isn’t over, crypto bloodbath will spill over to stocks – Ted Oakley

The Rise and Fall of Netflix (Investors Are Suing)

GameStop partners with FTX US

Band Protocol price surges ahead of V2.4 upgrade: Is it a buy?

ValhallaShiller.com is your news in crypto, investment and technology website. We provide you with the latest news and videos straight from the technology industry.
Contact us: anzanastudio@gmail.com

What Is Aave? Inside the DeFi Lending Protocol